I love to travel, but there’s no feeling better than coming home.  You know where everything is; no getting lost; a greater sense of pride.  Of all the places I’ve traveled to, I couldn’t imagine living anywhere else but Milwaukee.

Oddly enough, I didn’t know much about the history of my hometown until I took an elective course in college.  It wasn’t taught in my high school at all.  My professor had us reading selections out of several different books. (As a side note, this class changed the direction of my college career.  I finished my paralegal degree, but knew that I belonged in the realm of History and went on to pursue that)  It gave me the idea that I wanted to write my own textbook on the history of Wisconsin and introduce it into the school system as part of the mandatory curriculum.

It’s a rather ambitious task that I always think about but don’t really act on. 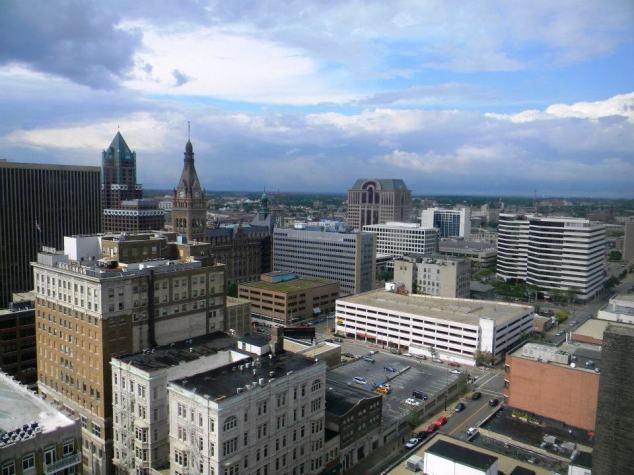 It’s no secret that I want noted local historian John Gurda’s job.  As the result of a charity auction, I was able to have lunch with him and a guest of my choice at Karl Ratzsch’s restaurant.  Gurda has written so many books on the history of Milwaukee.  I even have one autographed from when he was assisting former Mayor Frank P. Zeidler at a book signing.  I think he beat me to the idea of a textbook.  He probably wouldn’t refer to it that way, but the way his book The Making of Milwaukee set up, it reminds me of what I would picture being assigned in school.

So since my book will probably never be published (let alone written), I’d like to tell you little tid-bits about my favorite local items here and on Milwaukee Mondays.

This falls into the category of little known facts.

During the Revolutionary War era, Wisconsin was part of the Michigan territory.  We weren’t part of the major 13 colonies, but still owned by the British as the French Territory began beyond the Mississippi River.  British troops were sent our way in order to try and make friends and allies with the natives and fir traders.  No battles took place in Wisconsin.

Yet we have, buried here, a Revolutionary War Soldier by the name of Nathan Hatch who was drummer boy that had three separate tours of duty for the Massachusetts regiment.  After the war, he married and moved west to Wisconsin where he purchased some land near Capital Drive.  He died at the age of 90, and he is buried in Oak Hills Cemetery in Brookfield.  The original stone is said to still be there with a flag pole next to his grave.

All information was obtained through college lecture and historical markers and not any written source of which I can site.