Milwaukee has deep German roots going back to the 1800’s with the City seeing the boom by a wave of immigrants who left Germany for political reasons in the 1840’s .  Prior to the German immigration, the City had a population made up of French fir traders and trappers like Jacques Vieau and Solomon Juneau. Milwaukee also saw an influx of ethnicity such as Poles, Scandinavian, Irish, Jewish, and (Yankee) British, however the numbers of these groups could not top the Germans.

They brought with them intellectualism, art, their politics and of course beer (Schlitz, Blatz, Pabst and Miller Breweries).  Even in present day Milwaukee, you can see the remnants of the past in our architecture.  Notice the helmet like spires atop the Brumder building as well as the gazebo along the Milwaukee River.  Old World 3rd Street has seen the old buildings preserved and still hosting many German businesses.

The brand of democratic socialism brought to Milwaukee from the late 1800’s up to 1960 was not radical like Marxism or National Socialism, but rather a type of constructive socialism that was all for clean, honest government and clean living. The political ideology was for a democratic political system that combined socialist economics like cooperatives.  Many farms and dairies in Wisconsin were run as cooperatives.   Locally, the Socialist Party of America was called Sewer Socialism in Milwaukee because of how our sanitary system became modernized and it was something that the party members boasted about regularly.

In 1910, the Socialists won most of the seats in the Milwaukee city council and county board. The first Socialist Mayor, Emil Seidel, in the United States was in Milwaukee.  Under his administration, the working minimum wage was raised and workers saw the enforcement of an 8 hour work day.  This was after the bloody Bay View Rolling Mills Strike.   However, Republicans and Democrats alike did their best to discredit the Socialists and Seidel was defeated for re-election, and the corruption returned with Mayor Daivd S. “All the Time Rosey” Rose.

The 2nd elected Socialist Mayor in Milwaukee was Daniel Webster Hoan, who governed until 1940 with honesty and efficiency.  Mayor Hoan’s term was a golden age in the Milwaukee’s government.  Milwaukee won a number of awards as the healthiest, safest and best policed big city in the United States.

Believe it or not, but the Socialist Party of America were pacifits.  Their anti-war platform coupled with their predominantly German heritage got them in trouble during World War I.  Because they didn’t support war of any kind, patriotic Americans saw them as being Pro-German and feared a German take over on the home front. 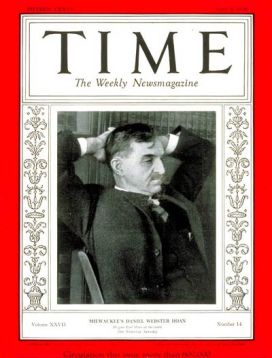 Milwaukee Mayor Daniel Webster Hoan on the cover of the April 6, 1936 TIME magazine. The inside article is titled Wisconsin: Marxist Mayor. Hoan was the 2nd elected Socialist Mayor serving from 1916-1940

During The Great Depression, Milwaukee did what they could to stay a float.  The City started work relief programs which built public parks and recreation centers, libraries and when money was short they derived their own Red colored Milwaukee Municipal Script.

This good outcome of governance certainly doesn’t seem to be the kind of Socialism that the country wants to remember, (because in the eyes of most, Socialism is always bad) but it is in fact part of our political history.  And I’m proud to have been born in such a city with a solid past.