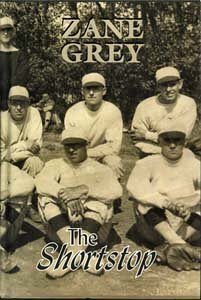 A friend of mine recommended that I read The Short Stop by Zane Grey.  It was quite unlike any story I had read by Grey before as it was not set in the old west with gunslingers.   As the title implies, it’s a baseball story and set back in the early 1900’s before million dollar contracts and performance enhancing drugs.  But that’s ok because I like baseball just as much as cowboy stories.

You can feel Grey’s love of the sport with each play by play game he writes.  I imagine as an author he was calling the balls and strikes just as he would have liked to see a perfect game be played.  Published in 1906, the language of the text certainly takes on that era and is much different from what slang ball players would be shouting today, but it is charming none-the-less.  The book isn’t all stats and strategy though.  Grey weaves in the coming of age story with a minor love interest, and the friendships and camaraderie of the team.

Chase, the main character leaves his widowed mother and younger brother at home to seek out a new source of income that will provide for the family better than their current situation.  It seems a bit strange to think that a fellow would have a better chance of making money by becoming a baseball player because of how hard it is to break into the sport…. but that is today’s thinking.  In the beginning of the book, Chase does struggle to find a team that he can stick with.  These are not major league teams, but local  teams.

One chapter that is strikingly controversial is when the idea of when playing baseball on Sunday becomes an issue.  I like how Zane Grey resolves this issue- I won’t spoil it for you in the event you want to read it (I’ve provided links below).  While the story of The Short Stop is fiction, I’m not certain if this part of the book has ties to reality or not.  It would require some extra research on my part now that I have completed the book.

Thanks to LibriVox and the Gutenberg project