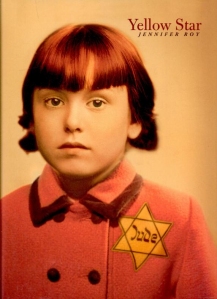 Yellow Star written by Jennifer Roy is another book that I picked up in the children’s section at the library.  I was interested to see how the Holocaust was going to be presented to a non-adult audience.  I was surprised to see that once I had opened up the book, that it was actually a true story of the author’s aunt.

The author’s aunt was named Syvia (Sylvia) Perlmutter, and like many of the Holocaust survivors, she didn’t talk about her experience very much until later in life.  She was only 4 years old in Poland at the begining of the war and 10 when it ended.What made Syvia’s story so remarkable was that she was one of twelve children to survive in the Lodz ghetto.  Here are a few statistics:

In the introduction, the author described her struggle with how to write this story.  She tried in both third and first person accounts, but found that it didn’t flow very well.  She finally settled on transcribing her interviews with Syvia’s the same poetical way it was relayed to her.  Sometimes, she only had a few words describing a memory or situation.   Thus the book is 227 pages of short stanzas of free form poetry.

Papa took me on his lap and told me this:
On his way home from work,
he passed the train station
and saw Itka’s face in one of the windows.
She was looking out
as the train pulled away.
Itka’s family had received a summons,
Papa told me.
It had come earlier that week.

I think of Itka
in a train car
packed with people
and Hava
disappearing from the street.
I have to friends anymore.

Eventually the Nazi’s began to thin out the ghetto and many Jews were shipped out of Lodz via train to concentration camps.  Those left behind were tasked with the job of cleaning up the ghetto and sorting out all the possessions left behind.  Syvia’s sister, was technically still a child, but passed herself off as a young adult and got a job so she wouldn’t be separated from her family.

Later on the Nazi’s decided that no more children were allowed in the ghetto and rounded them up.  Syvia and a few other children, including her cousin, were hidden in a basement.  She couldn’t go outside anymore.  One time, when the Nazi’s were doing random checks, Syvia and her father had to escape from the house and try to find a safe place to hid.  I had never heard of this before, but they ran to a nearby cemetary and dug a shallow hole and laid down in it so they were flush with the top of the ground.  I couldn’t imagine how scary that must have been as a 7 year old to have to lay in a grave, completely silent while the Nazis are running all over the city shouting and trying to find you.   That was just one of the times, Syvia was forced to be brave and only one of times that her Papa was a hero for saving his family with this idea.  Syvia always felt that she as insignificant and not brave.  Her time to step up came right before the liberation of Lodz.

Near the end of the war, Lodz was bombed.  Syvia woke up in the middle of the night when she heard things exploding.  She woke up her family.  If she had cowered in the corner no one would have made it out alive.  The slow destruction of the city was a chance for the rest of the Jews to escape.  They had been hiding in a building directly across the street from where the Nazi’s had their headquarters because Papa said, “it would be the last place they would look for us.”  However, the buildings were the targets for the bombs so the Jews had to get out fast.  Most frantically ran around the city without any plan.  Syvia’s Papa gathered everyone he could and herded them to an open field.  He told everyone to lay down in the courtyard and be still.

The bombs continued to fall and destroy all the buildings.  When it finally had stopped everyone stood up and tried to figure out what to do next.  That’s when they heard voices speaking a familiar language.  It wasn’t German shouting, but Polish and Hebrew and Yiddish.  It was the Russians who were bombing Lodz.  Papa found out that the Russian pilot was also a Jew and as he flew his bomber over the city, looking for targets, he noticed the courtyard where everyone was laying down.  It was the numerous cluster of all the yellow stars of David that had been manditorily affixed to the Jews’ clothing that caught his attention when they glowed in the spotlights.  He then called off the bombers and found a place to land in order to rescue the survivors.  What luck !  I could not help but cry when I read that.

I really enjoyed this book.  It was a great story of heroics and survival for sure, but when I read how they were rescued, I couldn’t help but cry.  My emotional person transfers into being an emotional reader too… as you can tell if you read my Wake of the Wahoo review.

On google books you can preview parts of the book.  Click the link below