I recently returned from a 2-week vacation to the west coast.  One week was spent in California and the second week was spent in Las Vegas with a friend.  When I was in California I had the opportunity to do only  a very little star searching as I only spent a few hours in Los Angeles and Hollywood.  Hardly significant time to get the full effect.

I spent over an hour pacing up and down the sidewalk taking pictures of the stars on the Hollywood Walk of Fame. This is a list of all the starts I took.  The most important to me were of course The Monkees, Kermit, Jim Henson and the Muppets.  It was also neat to find all the stars for the cast of The Dick Van Dyke show (one of my all time favorites). 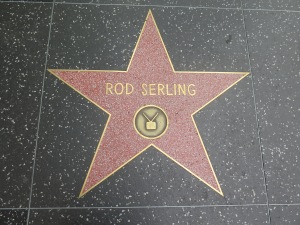 Here is a full list of Walk of  Fame Stars that I took pictures of:

I did visit Grouman’s Chinese Theater (now known as TCL Chinese Theather).  If given the opportunity I would have photographed all the prints and autographs in cement, but there were tons of other tourists milling about and their feet were covering much of what I wanted to photograph.  I felt kind of naive in that the first cement slab I wanted to find was John Wayne because of the famous I Love Lucy episode where she stole it and then tried several times to replace it.  To my slight disappointment…. John Wayne’s slab did not look like the one on Lucy.  I don’t know what I was thinking  🙂  Here’s a slide show of a sampling of stars

The other bit of star gazing I did was actually in a cemetery.  I have visited cemeteries in the past as a vacation destination for Presidents (Washington, Lincoln, Fillmore, Wilson, Kennedy) and for historical figures (some local history, some general American history), but I had never been to a “celebrity” grave site before.  While Forest Lawn is the place most associated with Hollywood, I had no plans for that plot of land.  I wanted to “see”  and pay my respects to 2 pretty significant people in my life; and those being Richard Dawson and Bob Crane.  How fitting that they were both buried in the same place.  I’m a big planner when I go on vacation so I had a list of internment’s and a general idea of where they were located.

I started out at the top of the cemetery and began walking up and down the rows one by one.  The first gravestone I saw was for Don Knotts.  His had so many engraved pictures from his most memorable roles.  It read, “He saw the poignancy in people’s pride and pain and turned it into something hilarious and endearing.  He will always be Deptuy Fife to me.  ❤

I walked further and saw Mel Torme, Eva Gabor, Natalie Wood and Louis Jourdan before I found Bob Crane’s grave.  I had seen what the stone looked like on the internet before, but when it sneaks up on you like that, I was surely taken by surprise.  It was if I had actually been standing before him because just like other celebrities I got real nervous and quickly took a picture and moved on before I started crying.  His had a nice poem at the bottom. The stone was divided in two sections, his on the left and his last wife Sigrid Valdis on the right.

I found other memorials for Karl Malden, Walter Matthau, Merv Griffin, Rodney Dangerfield, Jack Lemmon, Carroll O’Connor (A favorite of mine), Peter Falk, Jim Backus (Mr. Howell !!!!) , Marilyn Monroe (fans kiss her grave stone leaving lipstick marks) and Jack Klugman (another one of my favorites).  I stood there perplexed that I couldn’t find what I was looking for.  I stepped under a tree and pulled out my phone to connect to the internet to try and figure out where Richard was placed.

All I had to work off of was a picture.  I could see a white building in the background, a sideways facing bench and 2 planted pots.  I felt like I was looking at a treasure map.  With those clues in hand I was about ready to put my phone in my pocket when I got a text message….. I’m sure I’ve mentioned (if you haven’t already heard it) that my text tone is Richard Dawson calling my name 3 times.

The entire time I was in the cemetery, there was a woman sitting next (and talking) to a grave at the very edge of the park so I had been courteous not to go over in that area.  (This cemetery has both regular and Hollywood graves)  I took my clues and headed in that near direction.  I found the bench, I saw the pots not far ahead.  And then two steps in front of me I found what I was looking for.

I knelt down in shock and before I knew it, my head was in my hands and I was sobbing.  It was like the reality of him not being here anymore had sunk in.  There was no one there to give me a kiss, hold my hand to  make me feel calm.  After a few minutes and leaving my own memorial, I stood up and did what I could to wipe my eyes and nose with my shirt.  I could see Bob from where I was standing and that made me smile so I walked back over there again with more confidence.  It was getting late in the morning, as I had a reservation to go horseback riding in the Hollywood hills so I had to leave. 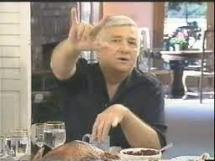 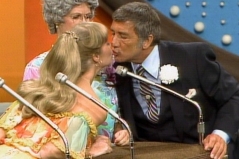 It wasn’t my intention, but on the last day of my vacation, a week later, I decided I had to come back one more time.  Not so much to find the other celebrities that I didn’t see the first time such as Dean Martin, but to say goodbye one more time.  This time I was able to walk directly over to Richard’s grave.  Bob’s was a bit more challenging as the sprinkler was on and despite my attempt to dodge it, I got soaked.