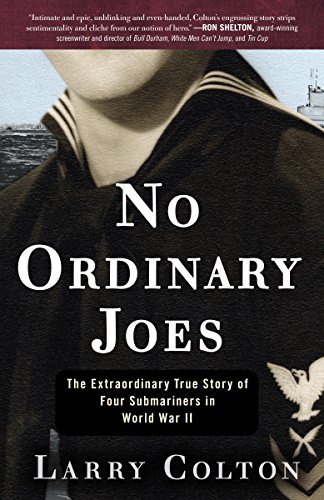 No Ordinary Joes by Larry Colton

History is getting older and older every day, and we must decide what deserves a place in the records books and what events can be skimmed over.  Americans of the “Greatest Generation” are aging along with history, and fading into it faster than we are able to count.  The importance of preserving their legacy and stories was not lost with Larry Colton and his book No Ordinary Joes.  Colton opens his book with a quote from President Kennedy regarding his pride for having been in the Navy; a sentiment also worn like a badge of honor by those in the submarine service.  Colton chronicled four men, Bob Palmer, Chuck Vervalin, Tim McCoy, and Gordy Cox who served aboard the USS Grenadier submarine during WWII.  Unlike other veteran narratives, he wanted to document a mini-biography of their pre and post war lives.  Colton does a good job of dividing the book into by giving each man a chapter related to the topic and then unifying the story again.

Prior to the war, each man had been ordinary in terms of being a victim of the Depression Era, struggling to make ends meet, and seeking out a way to improve their home lives.  This motivated them all to join the Navy more so than patriotic duty.  Specifically, joining the Navy could provide them something domestic society couldn’t; a steady income and “three hots and a cot.” After successful completion of sub school, each of the men were assigned to different submarines before coming together on the USS Grenadier.  On the 6th war patrol, 23 April 1943, the sub was attacked by a Japanese aircraft with a torpedo sending them 300 feet to the ocean floor suffering with the bow pointed up at a 20 degree angle; a damaged propeller; a fire in the maneuvering room, water coming in the engine room and a smashed radio.  After 15 hours under water, the sub was able to surface and were eventually taken prisoners.

Many things in life can make a man extraordinary, but none more than becoming an American Hero after coming out of a POW camp alive.  The gruesome details of the torture at the hands of the Japanese bring the realities of war to life and one can’t help but feel their own anger towards the enemy.  Colton’s book continues up to 60 years after the war to a point readers see an ordinary picture of the men- ones that sill wear the badge of POW and Hero, but also an depiction of men facing domestic problems like every other ordinary man does partly from their upbringing and experience during the war.