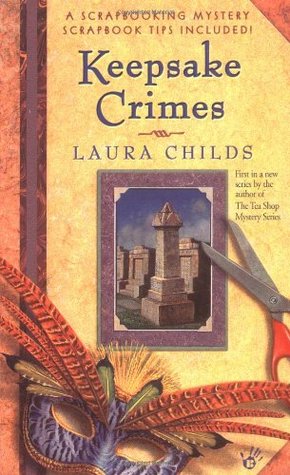 I heard about this book on Facebook from a group made for people who want to buy and sell scrapbooking and rubber stamp supplies.  One lady happened to be selling her collection of Scrapbook Mystery books by this author.

I didn’t purchase them but went to library to check out #1 in the series.

It certainly wasn’t what I was expecting and the book would only rate 2 stars from me.  I don’t read a lot of mystery books, but I at least expected that I might be able to gather some clues from the text that might help me figure out who done it.  This book did not do that.  Toward the end the murderer was revealed and the book wrapped up quickly like a TV show that had run short on time.

In the book, the main character is named Carmela and she owns a scrapbook store in New Orleans near the hot Mardi Gras happenings. Carmela has regular customers coming in to her shop for classes and tips on scrap booking.  That’s where the craft theme part of the book comes in.  She has an eccentric neighbor who owns a Gothic style/voodoo shop near by.

Carmela is recently estranged from her wealthy husband, Shamus, who has run off to try and find himself away from the world of banking and the grip of his family.  He is the one who is the murder suspect.  An acquaintance of his had died suddenly on a Mardi Gas parade float that he was riding on.  The last person he was seen arguing with was Shamus.  Since he has run off, every one approaches Carmela for answers so she begins some of her own investigating wile being watched by others herself.

The author goes into detail about Mardi Gras and New Orleans, the French Quarter area and the bayou.  In my opinion it seemed all a little flat.  I’m not really interested in that.  I would have been more engaged if she described a new place, not an existing setting.  One thing I learned in my college creative writing class was that simply by giving characters interesting and off-the-wall names does not make them interesting.  In fact it’s sometimes a put off.  I may be wrong because I have never been to New Orleans, but I don’t think that everyone there has that many unique names.

Despite this review full of complaints, I would most likely give book #2 a try in the future.   Perhaps the author was just getting into the genre and the next installment might be better.  I read the synopsis and it looks like it contains the same characters in the same setting so at least I’ll know in advance what to expect there.

The Callender Papers by Cynthia Voigt
My rating: 5 of 5 stars

I found this book while browsing with my mom in the young adult section of the public library. The description caught my eye because the story was about a young girl who was charged with going though and organizing personal papers. I thought what a great author to write about record retention and the screening of archival papers !

Without revealing too much of the story which lead to my conclusions, I will say that being an older reader, I suspected the direction in which the plot was heading by the middle of the book. However, that didn’t spoil the ending because it wasn’t exactly as I had surmised. Having said that, I would still choose to read this book again and again. My enjoyment of this book has also peaked my interest into what Cynthia Voigt’s other novels have to offer.

View all my reviews