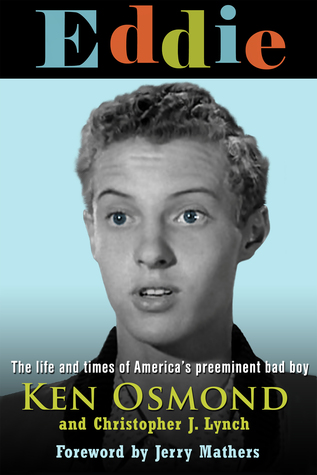 It wasn’t until very recently, last year actually, that I started watching Leave It To Beaver, and since then it has become one of my favorite TV shows.  Growing up in the 80’s it wasn’t a series that seemed very cool or interesting, but now that I’m older, something made me seek out these old black and white, feel good, TV shows.   Who knows, it may have been seeing Wally Cleaver’s dreamy eyes that made me stop channel surfing one day.

Once I started watching, I got hooked on Eddie Haskell.  No matter how many times, I shook my head and said, “No Beaver don’t listen to him!”  I still liked Eddie Haskell anyway.

I saw a special All-Star episode of The Family Feud with the cast of Leave It To Beaver was playing against, Your Hit Parade.  At the beginning of the show, during the introduction Ken Osmond was introduced as an LAPD police officer.   I found that to be most interesting, and certainly wondered what it would be like to be given a speeding ticket by Eddie Haskell!

I don’t recall how I found out that he had also been shot as a police officer, but I wanted to know more about it.  I did some searching online and found out that he had written a book, so I asked for it to be my Christmas present this year (2015).  I was surprised that it was still a relatively new release with it being published in 2014.

Right off the bat, in Chapter 1, is the story of how Ken was shot 3 times at point blank range by a car thief, and survived.  I found myself having so much respect for Ken Osmond, and I think that can be rare in Hollywood.  Actors can be admired for their roles and memorable characters, but how many can actually be hailed as a hero?  Oftentimes you hear about child stars who become wayward, unable to handle fame and the fall from the lime-light and are then drug addicted or dead.

Unfortunately, Ken Osmond had been forever typecast as Eddie Haskell and found it difficult to ever get other decent, steady acting rolls after Beaver.  In spite of that, he moved on with his life and joined the army reserves, learned to fly a helicopter, joined the LAPD, reprised his role as Eddie Haskell in the 80’s and of course enjoyed family life as a committed husband and father.

Even though the story  of Ken’s shooting was in the beginning, and not buried somewhere in the middle, the book still held my interest throughout.  Normally, when I reading a book it can stretch over months before I finish it, but with this one, I wanted to keep reading.  The book, with compact chapters, covers his whole life and tells of how he and his brother got into acting through his career on Beaver and life after.  What is unique is that there are trivia questions at the end of each chapter and you have to read on to the next chapter to find out the answer.

I admire Ken Osmond as a person, and I probably would have dated him as Eddie Haskell if I attended Mayfield High.

One of my favorite genres on TV is game shows.  It’s debatable today as to if some reality TV can be considered Game Shows.  But here I’m talking about genuine flashing light sets with contestants wild for prizes and cash money.

I have such memories of coming home from grade school and watching the Richard Dawson episodes of Family Feud during dinner.  I’m not sure what it was that made me like it so much (at age 7 it wasn’t Richard yet) because being that young, it wasn’t a game I could really play along with.  It might have been the way the board would ding and flip to reveal the answers because I like that better than the modern computer animated board.

It’s hard to rank Jeopardy and The Price is Right because they are so timeless, but I couldn’t leave them off the list.  I’ll watch them any chance I get.

These days I would have to add The Match Game to my favorite list as I only started watching it, and became addicted, 4 years ago and it’s from the 1970’s. I watch it everyday on The Game Show Network.  If I’m not yelling out the standard answer to Dumb Dora was so dumb—-“HOW DUMB WAS SHE ???” at least once a night, my family will think something ‘s wrong with me.

Newer game shows I liked were

Shows like Deal or No Deal, Who Wants to Be A Millionaire and Minute to Win It were good when they came out, but soon got boring, OVER dramatic, somewhat drawn out and they changed the format.

My favorite all time game show hosts are hands down, Richard Dawson and Alex Trebek.  When I was a little girl I had a big crush on Peter Tomarkan, but now it’s all about Richard Dawson.

As for notable contestants, I watched Ken Jennings win every day on Jeopardy and I was rooting for him too.  I wish those episodes would be released on DVD.  I asked Ken Jennings one time, via email, about that.  He replied that he wasn’t sure many people would want to watch that.

Trivia games are popular because the viewers at home can play along and feel just as smart at the contestants on TV.  I wouldn’t exactly call Press Your Luck home viewer engaging, but I was drawn to it because of the cute little Whammys that would steal all the contestant’s money. I said I rooted for Ken Jennings on Jeopardy, but sometimes contestants who win too much money can be seen as villains.  I think this guy might fit that bill.  His name was Michael Larson and he was a Press Your Luck contestant who found a way to memorize the pattern of the board in order to avoid the Whammy.  He racked up a massive amount of money compared to what other daily winners got.

There’s a really good special which dissects how he did it and how his opponents felt about it. (video below) The documentary called “Big Bucks: The Press Your Luck Scandal” was made 20 years after the incident happened and it shows the entire episode, which was only shown on TV once.

In my opinion he most definitely cheated. It’s cheating when you don’t play the game in the manner in which it was intended– randomly.  You can’t go to Vegas and count cards and not be prosecuted for it.  If he was going to beat the system he should have been able to land on more than 2 spots–at least that way he might not have been caught.

Watch the video and let me know in the comments below if you think he was a cheater.

Thanks a lot ! The blog post wasn’t that bad, Charles.

My absolute favorite TV show of all time is M*A*S*H.  It originally aired on network TV before I was even born, so I can honestly say that it’s been a part of my whole entire life.  I would watch it when I was a little kid when I really didn’t even have any idea what the show was really about.

This summer,  I had an idea to create something that is uniquely signifies the show and is easily recognizable — the sign posts that point to all the hometown places of each cast member.  The Smithsonian Museum of American History has the prop from the TV show.  It was on display at its temporary location in the Smithsonian Air and Space Museum in 2006-2007.  I used this as my model because the internet has several different variations of it.

My signpost is scaled down to about 3 feet tall.

The length of my signs were cut the about 10 inches long.  This way I was able to get four signs per piece of wood.  Next I referred to the photograph and labeled each board with the city name.

I did what I could to replicate the same script that was originally painted on the sign.  I used a sharpie marker for better control instead of painting, but be ware that the sharpie marker does spread once it starts seeping into the wood.

Next, assemble the base and pole.  I made the base into a cross with an extra block for feet to raise it up and make it more stable.

Measure the width of the pole and find a comparable drill bit to bore a hole in the base.

Apply some wood glue and stick the pole in.

Finally, glue the signs in order to the pole, angling them when necessary.

A step that I haven’t done yet, but you can do to add character is to distress the wood to give it a look like it really has been standing outside in Korean weather for years.